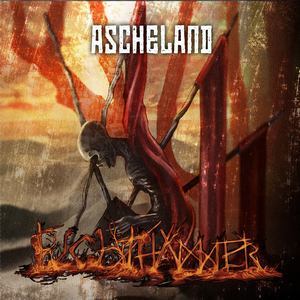 When it comes to death and black metal, it’s a wide open sea of opportunities. A simple mixing of the two flavors together can bring about varied and potentially interesting results. Austria’s Richthammer, on their second release Ascheland, their first in five years, make the mistake of not going far enough outside the box to keep things interesting.

The album starts out slightly on the wrong foot with an almost 2-minute intro that far outstays its welcome, but things appear to be quickly corrected when the blast of “Vorbote” then rips into the speakers. It’s a feral blast of death and black metal influences working together, with a sound that could easily be bookmarked from the latter part of the ‘90s. Nothing particularly wrong with that of course, as the visceral flavor is one that many choose to ignore in the quest to keep things modern and sterile. Things continue along through the album with a fair share of blackened tremolo riffing pairing off against some shreddy solos, blunt death metal aggression, and some occasional melodies to tie it all into a cohesive package. The problem is that outside of the already mentioned “Vorbote,” nothing really grabs the listener and forces them to pay attention to Richthammer’s music. It’s severely lacking in energy for a release like this, partly due to how familiar it sounds. One could easily exchange any part of the music at hand with one of dozens of bands and little difference would be noticeable.

Richthammer simply are too content to follow in the same footsteps as the blackened death metal acts that came before them. Ascheland could be a much stronger album if they focused on inserting some more compelling and outside of the box moments that engaged the listener. As it stands, it feels far too generic to give a stamp of approval to.