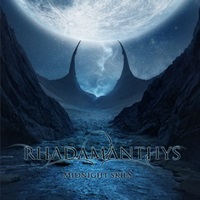 Given a heads up from local Ralph’s Diner/Metal Thursday promoter Chris Farmerie (as he played bass on 9 of the tracks), Boston, MA has a new progressive death/black metal artist to enjoy with Rhadamanthys. The brainchild of guitarist Charlie Monroy, he picked out musicians he felt comfortable to flesh out his compositions: keyboardist David John Blodgett, drummer Darren Cesca, vocalist Jeff DeMarco and bassist Eli James for two songs “Polaris” and “Children”.

After multiple playbacks, you can easily ascertain Charlie’s intricate composition skills and natural ability to allow riff textures and neo-classical, black, and death elements to heighten the sense of suspense and surprise in this material. Everyone from Cynic to Death as well as Shrapnel Records guitar virtuosos like Tony MacAlpine or Jason Becker come to mind when taking in “Of Dreams and Deception”, the majestic/aggressive title cut, and shape shifting “Another Dimension”. The drumming requires impeccable timing and tempo/signature changes, often moving from triplet offerings into blackened blast maneuvers from one measure to the next. Jeff’s screams and roars are extreme to a degree and yet remain clear for most ardent underground fans to pick up the words.

Charlie has all the requisite tapping, speed, arpeggios, and picking/dive bomb aspects to make his lead breaks very entertaining, but he also knows that in order to gain long lasting appeal, he better write some engaging hooks and riffs in such a way to construct killer songs. Be it more straightforward in almost a King Diamond meets Wintersun way for “Oblivion” or progressively and classically challenging such as “Where Darkness Dwells”, Rhadamanthys delivers a 50 minute album that takes multiple listens to fully absorb all the action. Even the interludes such as “Requiem” and “Polaris” aren’t background or throwaway fodder – setting up the next track for dynamic heaviness.

Handing off mixing/engineering chores to Mikko Karmila of Finnvox Studios in Finland and mastering to Danish legend Jacob Hansen gives Midnight Skies even more of a professional final outcome. A minor disappoint in the drum tone to these ears (it’s a little more cyber than I like my progressive death/black metal to be), but otherwise this is exciting material from an act I foresee moving up the ranks very quickly as labels will take notice.