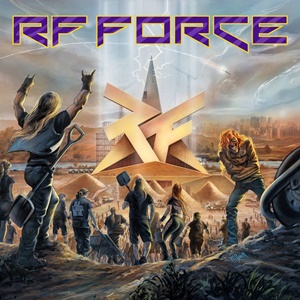 Privy to discovering new talent is a great perk on the media front. Especially for us old-timers who not only look forward to veteran artists putting out new material, but also being on the ground floor for the younger talent keeping heavy metal alive and thriving. Count Brazilian quintet RF Force in the latter category – their self-titled debut album proudly assembling ten tracks of old school metal chock full of 80’s reference points. The treasure trove of items right away on the Quinho Ravelli-illustration for the cover provides hours of eyeball gems to the legends – setting the stage for a highly entertaining aural odyssey.

The opening rhythms and piercing falsetto voice plus pumping bass action put “Fallen Angel” right where it belongs for the first track – fans of classic Dokken and Firewind will rejoice in the energy and spirit this cut conveys. The twin guitar lines and natural mix of traditional/power metal riffs and classic rock nuances from the hands of Daniel Iasbeck and Rodrigo Flausino will mesmerize most – check out the tantalizing tandem tricks during “Flying Dogs” and “In the Heart and Mind”, where visions of thrash come up for the former, while 90’s-period Helloween or Elegy thoughts creep in on the latter. Many times the atmosphere, pacing, and tempos may be familiar to those followers of Ronnie James Dio – especially his Sabbath and solo years, where vocalist Marcelo Saracino could be his vocal doppelganger during a semi-ballad like “Will You Remember” or the doomy, militant marching cut “The Beast and the Hunter”. Extra emphasis on soaring multi-part vocal melodies truly drives home specific key lines and choruses, while the 90’s groove/cymbal hits make “Fighter” another standout, channeling a lot of US/Northwest progressive influences from Queensrÿche and their offspring.

The South American scene has gained momentum thanks to higher quality access to the proper tools of the trade – and additional promotional availability as the internet becomes a great equalizer. RF Force through this self-titled effort will make an impressive mark, as these musicians are well-equipped to deliver excellent songs and performances that bring 80’s/90’s influences into the present day efficiently and effectively.