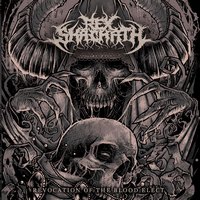 Revocation of the Blood Elect takes the strengths of the early ‘90s scene (there’s some definite Morbid Angel and Malevolent Creation nods) and applies a more modern production and aesthetic to them. It may not win the ‘originality of the year’ award, but there’s no doubt of its potency. The five tracks feature a bit of a thrashy undertone, as you can hear in “Within the Temple of Disgust,” but there’s also a good dosage of mid-tempo groove that keeps things on the catchier side (check out the massive grooves on “Colossal Rise” and “Atonement through Atrocity”). The drums have a militant blasting sense to them, coupling with the guitars to create the sense of a juggernaut plowing its way through a building. The vocals are the usual growls, but there’s plenty of power and menace to them and it gets the point across.

Wisely moving away from the total ‘old school’ game, there’s enough variation within Rex Shachatch’s approach that give them a bit of breathing room. Sure, it’s more death metal, but it’s a short blast of biting aggression that should have fans of the sound feeling quite pleased.