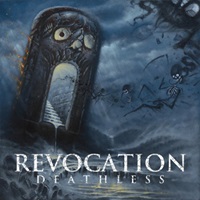 Mastering the art of mind-blowing death/thrash into a tangible style hasn’t been easy, but for Boston’s Revocation, they’ve certainly whipped a lot of audiences and fellow musicians into shape through their technical prowess and general metal wherewithal. Signing a new deal on Metal Blade, the fifth full-length Deathless reunites producer Zeuss and the quartet, previously working on the Teratogenesis EP in 2012 with the band. When you are this far into your career, the debate reigns about how much you are willing to drive off a familiar path versus serving up material that the faithful can consume in droves, while also stoking your own personal creative fires (remember the horn/organ action on “The Watchers” from Chaos of Forms?).

After initial exposure, a couple of things struck different chords to my auditory outlets. Vocalist/guitarist David Davidson throws in a little clean/cyber Fear Factory-like chorus action during the straightforward title cut, where the opening has a charging stair step/maze oriented riff attack that rivals Twisted into Form period Forbidden and drummer Phil Dubois-Coyne flexes his progressive Dave Lombardo meets Away chops. “Scorched Earth Policy” has this hyper-thrash base, gaining a lot of excitement through the interloping Davidson/Dan Gargiulo melodic segments or shred breaks. But those who are looking for the significant intricate rhythms or superior time change action where the band goes from mid-tempo slam to blasting proportions in a nanosecond, look no further than opener “A Debt Owed to the Grave” or “United Helotry,” the latter featuring a killer, quiet bass break from Brett Bamberger.

For all you instrumental aficionados, the 5:12 “Apex” will be enlightening, throwing down everything from an alternative, Foo Fighters-ish opening to progressive, speed, jazz and death elements – all the while astounding and delighting those who enjoy parameter pushing for technique and theory sake. The album ends on a high note with “Witch Trials,” based again on a local topic known all too well to Revocation, considering Salem’s proximity to Boston and more Coroner/Voivod odd-harmonic sweeps come in over an Edge of Sanity-oriented template (think Crimson).

Deathless overall has a streamlined feel to hopefully not make most of this material too heady or Berklee oriented. At 48 minutes, Revocation dish up another record that could launch many youngsters into more lessons, more instruments, and more of their own metal endeavors.