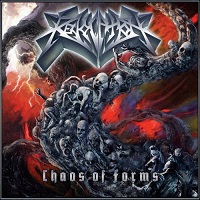 Poised to be the next breakout band in thrash, Boston’s Revocation could become this era’s Coroner if they played their cards right, something that’s quite evident on their third album, the domineering Chaos of Forms. Much like 2009’s Existence Is Futile, Chaos centers around guitarist/vocalist David Davidson and his bottomless pit of winding, tricky, but gosh-darn catchy riffs. Plus, there’s no trace of any retro-BS. Score.

In layman’s terms, Revocation is miles ahead of most thrash bands on a musical level. And again, we’ll use Coroner as a point of reference, for during their heyday in the late 90s had virtually no peer on the technical thrash front outside of the inconsistent Watchtower and if we want to get cute, Megadeth. For Revocation, the riff ideas and melodies are mostly of the progressive death metal variety, only sped-up and twisted into a thrash metal-ready form, as heard on the spiky “The Watchers,” which also comes along with some cowbells and 70’s-inspired keyboard work.

Hard to not get behind a song like “Cradle Robber,” which is basically the type of song Trivium has spent the last five years trying to write. With an infectious, almost Annihilator-like riff leading the way, along with some cool solo trade-offs (Dan Gargiulo is the band’s new second guitarist), “Cradle Robber” is clearly the best thing Revocation has come up with. Not to be outdone, the punchy (and rare burst of old-school) “No Funeral” is a blistering romp, as is the cruising-for-a-bruising “The Watchers,” which also sees some gnarly vocal trade-offs. A total team effort this time out.

When one wracks their brain and tries to come up with a North American act on par with Revocation, an instant blank is drawn. Revocation are clearly the black sheep of the scene, and frankly, shouldn’t be confined to just one scene. WithChaos of Forms, their startling diversity and raucously-awesome riffs transcend pretty much any scene. Gnarly stuff.