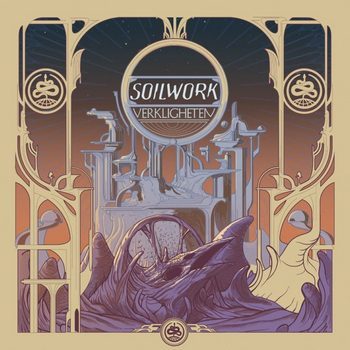 [10/10] Veteran acts in heavy metal tend to go in one of two directions – the more common of which is to simply retread familiar waters with each album and give the fans exactly what they want. But some bands get a breath of fresh air as they continue, delivering material that may challenge the listener and/or bring them in different directions. Soilwork has been operating on what some might say is a career-level high since The Living Infinite, and Verkligheten does nothing to slow that down.

That slightly melancholic yet thrashy and groovy mix that the band began moving more towards with The Living Infinite is still a big portion of what the band operates on, it’s something that has made some steps forward, and Verkligheten stands up as the most ‘mature’ release the band has done. There’s some genuine darkness and dreariness, despite the occasionally punishing tempos and mid-tempo grooves. “Witan” is a good example of this, with the somber tone to the melodic riffs and even Bjorn Strid’s lines within the chorus, even if the band does ramp up the intensity at other points. “The Nurturing Glance” is another top shelf moment for this, with a gentle, longing acoustic introduction before things intensify with heavier riffs that retain some melancholy to them, before diving headlong into some almost traditional metal sounding riffs and bouncing back into some of the album’s most delightful melodies in the chorus. That said, there’s still some classic Soilwork to be had, with mid-tempo romps like “The Wolves are Back in Town” and “Bleeder Despoiler” along with the uber-catchy twists and turns of “The Ageless Whisper” to indulge in.

The band’s ability to toy with dynamics continues to be a focal point as well. Opening cut (outside the surprisingly moving instrumental opener) “Arrival” lays into blastbeats atop clean vocals – a statement that new drummer Bastian Thusgaard is a fully capable replacement. “Full Moon Shoals” bring in some of Bjorn Strid’s most stunning clean vocal work to date while some mid-tempo riffage delivers the goods around him, only to pick up tempo into something far more venomous in the track’s second half. If one track really veers outside of the rest, it’s “Stålfågel,” which never does much for tempo changes but manages to enrapture its audience with some stunning vocal work, addictive grooves, and more straight-ahead approach. Lastly, the fiery and blast-beat riddled attack of “Needles and Kin” (which also features Tomi Joutsen of Amorphis growling away) engages in some of the most intricate, thrashy riffs of the album and works as “Stålfågel” mirror opposite, and a real treat for long-time fans of the band with nary a break in the velocity.

Holding tight to the same high-water marks that The Ride Majestic strove for, while moving into more dark and melancholic territory, the most surprising part of Verkligheten is how addictive and fun it still is. Whether it’s Strid’s ever-impressive vocal work (no doubt somewhat related to The Night Flight Orchestra’s growing dominance), the thrashy/groovy combination of catchy melodic riffs, or the tastefully varied synths and drums, there’s plenty of moments to cherish. With three absolute homeruns for albums in a row, there’s no one who does modern metal better than Soilwork. – Kyle McGinn

[9.5/10] Bursting on the scene during the 1990’s to influence many a movement (American metalcore for certain), Soilwork teeter/totter across the melodic death and groove metal lines, interspersing extreme and modern aspects when called for depending on the record. Considering Speed and David Andersson’s side activities with The Night Flight Orchestra making steady in roads for their AOR/melodic yacht rock proclivities, it’s excellent to hear that it seems to fuel the fire for Soilwork to still attain accolades for their own strengths and skill sets in the scene. To put it succinctly, Verkligheten rocks – proving that the eleventh studio record blazes a trail few upstarts (or veterans) can match.

The record appears to embrace contrasts in unique combinations – be they bluesy, melodic, harmonic, or dynamic in juxtaposition. It can be blackened trilling and blasting for the beginning of “Arrival”, or calmer and ethereal during passages of “Full Moon Shoals” – the quintet content to go where the ideas allow in an open context, even pushing the clean to extreme ratios in spots that aren’t expected from track to track. The brilliance of combining shimmer melodic guitar runs over insane blasting maneuvers for “When the Universe Spoke” gives chase to a sequence of fierce Speed screams as the rhythms crush all oncoming traffic, transforming on a dime to his AOR-charm during the chorus that allures and comforts the savage beast. Of course you’ll get the prototypical Soilwork stomp and mid-tempo efforts like “The Wolves Are Back in Town” and “Bleeder Despoiler” that revert back to Natural Born Chaos days, but then you get some modern keyboards and uplifting, crunchy fare for “Witan” that proves the band isn’t living off nostalgia and willing to keep an ear to the ground if it suits their style appropriately.

Anyone who worried about Bastian Thusgaard (The Arcane Order) filling the drum seat for Dirk Verbeuren (who left for Megadeth) need not worry – the man is more than capable of being groovy, fancy, and tearing the snare/double kick to insane speed proportions. Some of my favorite work is when he mixes up the melodic death action with a bit of progressive groove, a la “The Ageless Whisper”. Overall you get the sense that Verkligheten allows Soilwork to paint broader strokes in those hidden crevices sonically – navigating with precision, focus, and enjoyment. They’ve been riding a solid studio run of records since the sprawling double album The Living Infinite (leaving Figure Number Five and Stabbing the Drama in the rear view), and sure to keep the Soilwork legions clamoring for more. – Matt Coe