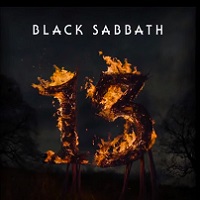 Two big points of concern: 1.) No Bill Ward; and 2.) How much will this sound like an Ozzy solo album? The reference point for that is the two songs Sabbath tacked onto their 1998 Reunion album, “Psycho Man” and “Selling My Soul,” both of which were uninspired garbage. No matter, for Osbourne, Iommi, and Butler seem to have their noggins in the right place for 13, the first album to feature the trio since 1979’s Never Say Die.

Rage Against the Machine drummer Brad Wilk is in Ward’s place, a suggestion from producer Rick Rubin that turned out to be wise. Wilk’s tom and cymbal accents resemble Ward’s playing from the 70’s (see “The End is the Beginning”), so in a way, it’s not like the album suffers without the erstwhile drummer. Ozzy sounds predictably auto-tuned and repaired, yet not nearly as uncomfortable and cartoonish as he sounds on his solo work. Yeah, there’s some real dumb lyrics (c’mon Geezer!) happening on the aforementioned “The End is the Beginning” and “Loner,” but the doom and gloom is there, which makes Ozzy the bit player he always should have been.

Iommi is playing it safe with his riff choices, opting to trace over the rudiments of the band’s first six albums. It explains why the angle of “God is Dead?” “Age of Reason” and “Dear Father” are familiar, yet tuneful numbers, saddled rightfully within the band’s wheelhouse. It’s different for Iommi when Dio is manning the mic – there’s more melody and exploration, but with Ozzy around, the riffs have to be a bit more blocky – and they are. More guitar solos could been asked for, too.

Sabbath have done themselves proud with 13, let’s point that out. For a group of men in the 60’s with various health problems, it’s an album that might give the rest of metal’s aging old guard the impetus to keep recording. Alas, 13 seems very self-aware, which for Sabbath and their impeccable legacy, is a good thing. To see these guys stumble over an album would have been an utter travesty.