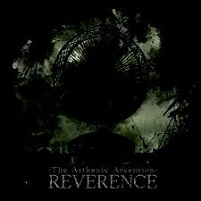 Within French metal (particularly black, but noticeable everywhere) there has been a movement over the past decade very similar to one within French cinema: a move toward and the continual redefining of extremity. The aptly titled New French Extremity is often defined through excessive use of graphic sexuality, violence, and general viscera in exposing all the terrible layers that lie beneath most human behavior. Similarly (and with all the same lofty artistic intentions) the rise and overwhelmingly effective use of extremity by groups like Deathspell Omega, Blut Aus Nord, and even Gojira have come to be mainstays as the perennial monsters of output from the country and all of their divergent and unique signatures are found within the halls of The Asthenic Ascension. While Reverence isn’t quite as unique as the above mentioned heavyweights, the band is nevertheless very much a part of this New French Extreme in metal (industrialized black metal in this case).

Industrial overtones, no stranger to anyone versed in recent Blut Aus Nord outings, carries substantial weight here. While never the focus, it is instead always lingering in the background serving as a suffocating reminder of the depths of which this sound can go, prevalent on “Psalm IV.” Doom aesthetics permeate on “Darwin’s Black Hall” and others still yet are dissonance and chaos driven, showcased in “Ghost of Dust.” Not to leave any particular sonic influence stone unturned, there is even a very intense indulgence in Gojira worship on “Cold Room,” and along with being a spot on ringer for the band’s sound, it’s decidedly fantastic with no bitter aftertaste. Though thematically tied throughout, the variation within the black metal sound is fairly surprising, very little staying still or constant for long.

Hailing from a culture that has no qualms with allowing most anything to be indulged, it’s really fascinating where Reverence will go in the future as they continue growing. The marriage of black and industrial words, despite the common perception and the countless failures, is not an impossible one, especially when built upon the foundation laid by the modern French black sound. Closer “The Asethenic Ascension” covers every reason why this discourse between different approaches in dehumanization are not only eviscerating in effect but almost orgasmic to let sink in. Though Reverence as a group still have to work to fine-tune their particular sound (so many influential signatures spread across the album) the effect of listening is made no less intense for it. In many ways a true nihilist’s wet dream, The Asthenic Ascensionis a worthwhile trip into the abyss.