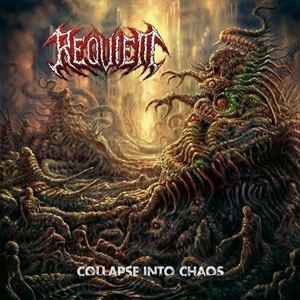 An act with almost twenty-five years under the same banner, Requiem are a five-piece outfit from Switzerland embracing a mix of US and European influences within death metal for this eighth studio album Collapse into Chaos. Already familiar with the rhythm section’s abilities in a power/thrash context for Poltergeist, it’s great to hear some heads down brutality with smaller pockets of mid-tempo groove to temper the insane blast beats, furious riffs/picking, and guttural bellows vocally that assault every fiber of your being. Subscribing to no trends, the meticulous attention to the finer details pays dividends in a crisp, hard-hitting twelve track salvo that executes its savage mission in a tidy thirty-six minutes and change.

As insanely hyper as many of the speedier sections of songs like “Fade into Emptiness” and “Down to Zero” are, there is always a relatively calm/restrained transition spot where the musicians lay into this heavy doom/death groove. Sort of remembering that as great as Vader and Napalm Death are at warp speed, you often need a bit of older Death or Bolt Thrower sonic control sometimes to make things that much more impactful, memorable, and distinctive. The jagged riffing from Phil Klauser and Matze Schiemann hits jackhammer / buzzsaw proportions for “All Hail the New God”, while the mid-section contains some sick Dave Lombardo-esque double kick mechanics from Reto Crola before the low-tuned tremolo accents cause more spasmodic energy flow. Snare four counts signal the next insane riff/growl-oriented assault, giving “Ivory Morals” a punk-ish/grind flavor that doesn’t relent for the 97 second arrangement. Requiem also doesn’t forget to inject the occasional old school melody or thrash part if called for in the mix – check into “Out of Sight, Out of Mind” or “Mind Rape” in that regard. The lyrical content is very thought-provoking: subject matter running from media/technology control to financial class warfare as well as taking on systems of government tyranny much more heady than typical blood and guts subjects, another welcome aspect for enjoyment.

Add in a stellar mixing/mastering from V.O. Pulver and Requiem can stand up well next to the best in the faster death platform – as their influences are still old school enough to not be overly technical or lose the map when it comes to writing catchy songs. Ideal for those who love the 1990’s US/European death bands who want a new slice of material in today’s marketplace.