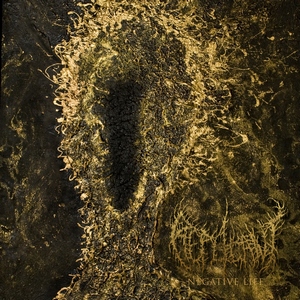 It doesn’t take much to predict what Replicant are all about given the tantalizing and otherworldly cover of Negative Life. The New Jersey dissonant death metal squad of Replicant have brought their first full-length onto the world with Negative Life, having released an EP titled Worthless Desires two years ago. Expect the usual amounts of mind-boggling displays of chaos and madness upon entry, but with a little more to latch onto.

Firmly carrying the torch of skronky, unsettling death metal of bands like Gorguts and their ilk along with the dissonant Deathspell Omega flavoring, Replicant don’t merely copy everyone else. Instead, they absorb those components and add some others to change things up. For instance, one can find some pitch harmonics a la Immolation at times, some straight-forward groove and assaulting riffs, and even some noise/mathcore craziness to blend the eerie and sometimes creepy atmosphere that Replicant plays in. At its best, what this does is provide the listener with a sense of “what’s going to happen next?” The riffs often take unexpected left hand turns, with a strong sense of appeal to grab one’s attention. “Chaotic Neutral” is seemingly chock-full of them, going from one headbangable moment to the next. But for each jagged and angular riff to be found (see “Oceans of Dust”), provide some atmosphere, for which the instrumentals “Selfish Universe” and “The Frail” delight in frightening atmosphere. Of course, the whole thing could have ended in a directionless mess but there’s a strong sense of coherence, even given the unpredictability of it all. There’s a clear sense of songwriting hidden in the density.

Negative Life succeeds because it doesn’t simply stick to the usual routines of dissonant extreme metal. Some grooves help to balance the atmosphere and dense structures with something that can be grasped almost immediately and give it some added leverage. Perfect to test the waters for those a bit leery of the sometimes assaulting nature of this genre.