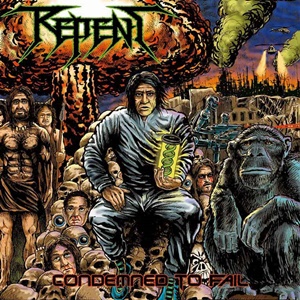 Spearheading the early 90’s wave of German thrash, Repent have only released three albums prior to Condemned to Fail – and this fourth full-length comes after a seven-year lapse between records. Undergoing more lineup changes (former bassist Alexander Raab returning, plus new drummer Andy Brandscher), sole original guitarist Philip Rath felt the time is right in their discography to develop a concept work – humanity being a part of creation’s crown, trying to live in harmony with nature instead of destroying it.

There’s an evident higher musicianship level prevalent in the guitar riffs and fluid lead breaks that Philip and second guitarist Martin ‘Heusi’ Heusinger deliver throughout – check out the Forbidden meets Sacred Reich-like swings for “Progress Paradox” for an early energetic barnburner. Contrasting the thick riffing and drop on a dime stop/start transitions are the gruff, semi-barking vocals of Jürgen ‘Emuel’ Aumann – sure to keep Repent away from commercial pastures and faithful to the underground hordes, as “Theo-crazy” and “Wimpreaper” serve up his plethora of raspy, rapid fire mid-range melodies and savage screams. The production values and tones aren’t quantized to death or set up on the grid to suck the life out of the songwriting – you can hear the progressive bass parts as much as the swirling guitars and punch drum kit work, making for quite an enjoyable (and difference making) experience than 95% of the records in this genre today. Even the gang background vocals that appear in spots for “Hypocrite’s Tears” possess their own level of Teutonic charm as if setting up the microphones six beers deep into the session. When the band wants to attack that reach back into some Exodus/Slayer motives for finesse and pounding aggression tactics – but for the most part, Repent have that extra level of melodic sophistication that many of the late 80’s/early 90’s thrash acts latched onto.

Aware of their professional hobby status – Condemned to Fail succeeds because the band creates a semi-progressive thrash template that gains its melodies from the catchy, fluid guitar parts, while keeping its ear to the ground thanks to a punishing vocal performance. In the end, the ardent thrashers all win.