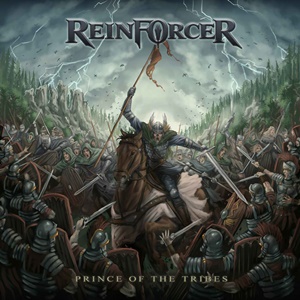 These days combining sub-genres of metal seems to be an important distinction marker beyond what musicians can do for their image. In the case of Reinforcer for this debut album Prince of the Tribes, that means taking classic heavy metal and employing an epic power approach. The results can be breathtaking or polarizing, depending on your viewpoint. Nonetheless, many of these nine tracks possess an addictive, catchy factor that is undeniable – setting the stage for a quintet that probably will gain favor for many who love uplifting melodies and driving riffs with cultural earworms.

Imagine a mixture of early Blind Guardian power against some Iron Maiden/Unleash the Archers-like traditional passages and you’ll get the gist of where Reinforcer comes from on the musical front. Twin gallops from Tobias Schwarzer and Niclas Stappert set the stage for the dramatic, theatrical angle vocalist Logan Lexi employs– “Thou Shall Burn” and “Black Sails” exemplifying the foundation driving the sound of the band. Occasionally the material takes on a bit of an 80’s classic nuance – only to be driven again by speedy double kick sprints and choir-oriented choruses as “Hand on Heart” demands that unison audience participation throughout, even as Logan occasionally matches the guitar melodies note for note in specific verse parts. The record ends on a moving semi-ballad “Z32”, stretching the multi-octave register of Logan, showcasing some of his emotional resonance in the lower range verses while also executing some interesting Hansi-like charm when going higher in the chorus. Even though this is a cross-pollination of styles, Reinforcer are economical in the arrangements – no song reaching beyond 5:14, with most of the material sitting in a respectful 4:30 range.

Telling tales of different historical eras and specific battle events, Reinforcer as a newer band will have an uphill climb ahead of them to separate themselves from a general metal public who revere the work of Tales from the Twilight World, Imaginations from the Other Side, and the 80’s Maiden discography. Prince of the Tribes lays the groundwork for a possible future Teutonic headliner, as the tools are there for some triumphant sword and steel victories down the line.