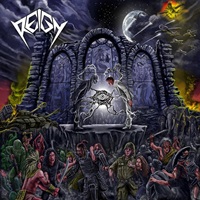 Chicago has consistently produced some memorable metal from the 1980’s on up- and since 2013 the thrash quartet Reign aim to add their creative stamp through their output. Maximum Carnage is the band’s second EP, fresh off last year’s WMD EP and a subsequent West Coast/Mid-West tour run in support of that recording. Given the fact that the thrash genre appears in this third/fourth wave to be more prevalent (and popular) than ever, how Reign approaches things from more of a technical/progressive standpoint can be a key difference maker for long term appeal.

A lot of the guitar work on tracks like “Visions” and “Wasteland” has a multi-pronged approach, the band appreciating the intricacies of Death and Forbidden as much as the heads down heaviness of current groups like Havok or Warbringer. The raspy, savage delivery vocally from bassist Jack has that John Kevill meets Tom Araya roar, while the rhythm section isn’t afraid to throw down some slower, off-time madness against their normal power/groove responsibilities (most evident in the closer “Murder Capital”). Many times throughout the four main songs surprising twists take place as far as tempo changes and the riff flow, keeping your brain and body excited for what comes next – and the lead work also has a lot of forethought amidst the melodic meets neo-classical fluidity. Equally intoxicating cover art will probably attract a lot of interest to those who like to judge based on first impressions – and fortunate for the listeners, Reign backs up the goods on a professional, diverse thrash front.

Some metal bands stay stuck in one gear as far as speed or aggression, and fail to look at the wider picture as far as dynamics, feel, and individuality. Maximum Carnage in a little over 17 minutes embodies Reign’s execution as solid players who take control of offering killer, memorable songs that are musically brilliant while also being very heavy when need be. Wide camps of old and new thrash aficionados need this.