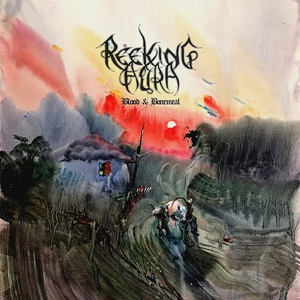 Too many cooks spoil the broth? In the case of NY/NJ’s six-hydra-headed Reeking Aura, twelve hands only turned the soup into a festering concoction of death metal goodness. Conceived around 2019 with the original intent of showcasing dual guitar leads with an old-school death metal flavor by Ryan Lipynsky and Rick Habeeb, the addition of Terrell Grannum and Tom Anderer plus ‘Big Will’ Smith soon ensured that Reeking Aura is anything but formulaic. Manning the skins is new member Sam Shereck of Stabbed and Blame God, a formidable addition to an already impressive, albeit incestuous line-up of musicians from Artificial Brain, Afterbirth, Unearthly Trance, Buckshot Facelift, and Thaetas.

The result of this unholy union of NY/NJ scene veterans yields an album chock-full of spine-snapping death metal that’s anything but formulaic (leave that to Frozen Soul). Blood and Bonemeal sets out to depict a morbidly psychotic farm caretaker who is slowly losing himself to the horrors of the property he’s residing in. Will Smith is truly one of the genre’s best vocalists, and lyrically he’s more imaginative than the myriad of gore-fixated wordsmiths out there. Whether he’s gurgling about intergalactic robots or a destitute farmer, his presence on any record lifts the quality of the songwriting, and his cohorts solidly back-up his words with riffs and solos that are sure to burrow into your brain for weeks on end. Standouts like “The Pyramid-Shaped Plow/The Caretaker” and “Harvesting the Hatchet” both end with neo-folkesque passages that offer a welcome break and definitely kept this record from being a run-of-the-mill DM record. The identity of the musicians involved surely crept up in the songwriting that it made Blood and Bonemeal a definite must-have in any self-respecting death metalhead.

Is this Agricultural Metal? Farmcore? Post-Children of the Corn-death sludge? Maybe it’s all of it and then some more.