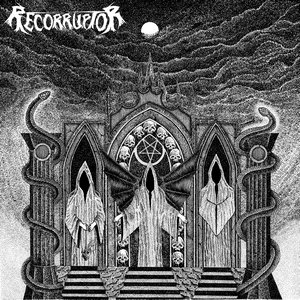 Michigan’s Recorruptor first came to us when we found their 2017 release, Bloodmoon, on Bandcamp. Speedy death metal laced with thrash, that touched on some black metal as well as making sure to keep some melodies in check. The Funeral Corridor is the act’s latest full-length to come, and is conceptual in nature. A release that sees them keeping to blazing speed while becoming more well-rounded as a band.

The first and foremost aspect of Recorruptor is that of furious, adrenaline-soaked speed and The Funeral Corridor manages to keep that impressive piece entirely intact while adding a bit more depth and nuance to the band. As one knows, you can’t simply thrive on speed alone – especially with an album that weighs in at 53 minutes. Being a concept album helps with this aspect too, giving the band some more leverage to incorporate different tempos in the story. There feels a greater emphasis on the blackened elements this time too, which aids in supporting the speed with some strong melodies. Finale “Forever in Exile of Darkness” is a great way to go out, with a standout melodic solo that swings into more melancholic feelings later on and is a nice change-up from the fiery and frantic riffing and drum assault that moves a good chunk of the track. “Tormented Egress” buzzes with blackened riffing at the onset, and moves into more eerie and meandering tremolo melodies as it continues a forward march and pushes up the intensity. There’s also a time for some grooves in the track as well to up the heaviness while slowing down the tempos. These things all work for the band because the tracks are a bit longer (generally 5-6 minutes each) and they make good use of the time in switching things up instead of just going out to simply bludgeon from beginning to end.

The Funeral Corridor is a solid step up for Recorruptor’s second effort. They bring in some thrilling death/thrash speed and lace it with other elements to keep the listener engaged and moving.