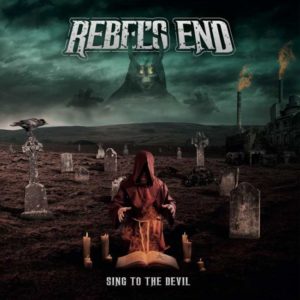 Belgian act Rebel’s End since 2016 have been a healthy export of melodic hard rock/metal – the type that has a lot of 80’s spirit and bluesy/sleazy qualities as a prevailing method of execution on this second album Sing to the Devil. The four-piece possess a lot of energetic verve and youthful aggression, tempering those qualities with the necessary catchy hooks and infectious four-part background vocal harmonies that should receive plenty of audience support as the fans cheer, clap, and join in the celebration. Straddling influences across the American and European spectrum, old and new aspects unite to get the job done here.

Throughout the record specific traits allow Rebel’s End to express their metallic nature – drummer Gunther De Beul laying down some faster double kick activity during “Rawhead” and the chugging anthem “Outlaw” against the steady guitar layers that make you think of Hardcore Superstar or others of the current Scandinavian breed of killer artists. Sitting in that sweet radio-friendly sweet spot of three-minutes and change for most of the arrangements, the gang-like vocals marry brilliantly with the bluesy riffing plus hypnotic grooves – “Evil Eye” penetrating in a way classic Skid Row did back in the late 80’s, while “From the Ashes” features the right wah-wah solo support and thick bass line momentum as Jef Wouters’ sleazy, snide voice resonates in that personalized, leader of the pack territory. The occasional softer, moodier moments allow for dynamic diversity before Rebel’s End return to their three chord-oriented melodic hard rock/metal terrain – as songs like “Blood from a Stone” and “End of Me” are highlights, the latter containing some sweet twin guitar harmonies and crunchy, mid-tempo stomp that is quite hard to shake off the brain.

If names like Finnish act Temple Balls, Danko Jones from Canada, and the already mentioned Skid Row mean anything to you, there will be a lot of those influences pulled together to make Sing to the Devil addictive to your ears. Meant for uplifting your mood and bringing the party to your nearest location, Rebel’s End should be successful launching this material from the studio to live stages of a moderate to slightly bigger size range.