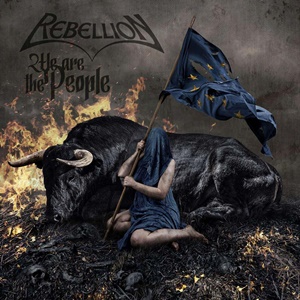 Originating after two former Grave Digger members split to start this band in 2001, Rebellion is a German heavy/power metal act very traditional about their approach. Tackling subject matter from Shakespearean literature, Viking and Angelo Saxon history, it shouldn’t be surprising that for their ninth studio record We Are the People they delve into a political stance of how racism and nationalism fueled wars from The French Revolution through World War II. Founding member Uwe Lulis may not be a regular Rebellion member now as he has joined the ranks of Accept, but he handles the production, mixing and mastering duties plus contributes guitars and leads for “World War II” – the songwriting and performances balancing the tried and true with some left field ambiance and harmonies to match the atmospheric aspects in the storyline.

Galloping, militant riffs and gang-like choruses give “Risorgimento (Tear Down the Walls)” and “Ashes of Life” that Teutonic charge Rebellion is well known for – sure to appease people into older Accept, Judas Priest, and of course Grave Digger. Soothing keyboards and building rhythmic accents set the stage for “Sweet Dreams”, the guitars and steady drumming providing that mid-tempo battering ram atmosphere while the vocals float between whispered drama and gritty metal templates, Michael Seifert a clearer version of Chris Boltendahl or Udo Dirkschneider. Modern, down-tuned aspects creep in a bit for “Vaterland”, the main musical hooks a bit more diverse with interesting clean to heavy transitions, although the chorus contains half-English, half-German lyrics. Slide guitars allow “Shoa (It Could Have Been Me)” to become an epic seven-minute plus outing, incorporating some tremolo-fueled picking and twin harmonies beyond the doom/power riffs that rivals older Dio or Manowar at their best. The record ends on an uplifting note with the title track – the message of hopeful European unity evident while the injection of melodic hooks as well as the forceful chorus a fitting conclusion to this album.

Working class musicians performing in an established heavy/power metal template, Rebellion knows their skill sets and perform in a professional manner. We Are the People probably won’t set the world on fire, and yet it is a reminder of the unifying force that this genre can provide at a time when we certainly need more community and less division.