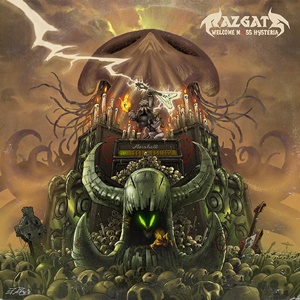 Jumping over to Punishment 18 Records after releasing their debut Feral Evolution the previous year for Sliptrick Records, Italian thrashers Razgate certainly do not lack in coming up with material quickly. Welcome Mass Hysteria contains ten-tracks of semi-melodic thrash musically, and vocals that possess that raspy attack that fits more of a Teutonic template. What immediately caught this scribe’s attention is the logo and cover art – first, the claw/bird shapes to the outside letters of the band name, and second the presence of horns, a flying V, and lightning into a scene filled with little details to treasure. Now let’s get to the music – because in the end, that’s what matters most, right?

Razgate possess a strong rhythm section in that Mötorhead/Destruction mold that can slam home a speedy part in one measure, then lock into the rhythm guitars to spring forth massive crowd slamming activity – check out “Sweetest Poison” early on for both aspects in one song. At times the material does revel in throwback predictable elements – certain intros that have a Slayer-esque chug or tribal march during “Sons of Rage” – and vocalist/guitarist Giacomo James Burgassi mirrors the inflection and plaintive screams that Tom Araya made famous as well. The lead break action from Francesco Monaci subscribes to frantic insanity of the highest degree, occasionally intertwining melodic nuances but for the most part using every whammy bar, tapping, or divebomb maneuver possible. For instance, “Skinwalker” instantly features crazed tapping before the mid-tempo riffs and background gang vocals take over this otherwise conventional thrash effort.

Three of the ten tracks hover past six-minutes – while most of the songs get by under five-minutes. The ‘epic’ songs unfortunately just drive certain parts into the ground without delivering anything unique or substantive to justify the longer execution (“Face of Apocalypse” the worst offender). Razgate aren’t the worst European thrash act currently treading the boards, but they also aren’t really stepping up to the plate and hitting home runs when bands like Havok and Warbringer swing for the fences for every outing. Approach with caution.