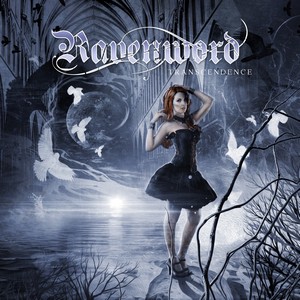 If the name and cover art weren’t clues, RavenWord are inspired by Edgar Allan Poe’s The Raven, and bring that gothic atmosphere into the symphonic metal realm. A bit of backstory details a journey towards this release which starts in 2007, including a hiatus in between and some member turn over, and also states that this is a ‘one-time’ studio album – leading one to believe that there probably won’t be more material to come.

RavenWord take in all of the trimmings that one would expect with a classically-influenced symphonic metal band and put them out there for the world to see. Big, bombastic synths are almost constant driving force, some neo-classical riffing and melodies are tapped into by the guitars, and Chiara Tricarico (ex-Temperance, Moonlight Haze) executes some gentle yet effective vocals. The best part is that they do seem to understand that the guitars need to be players, not background dressing, and they occasionally drive up the speed with some power metal fury and pull off some shredworthy solos (“No More” or “What I Need”). The problem that keeps it grounded in the “good but not great” category is that it is plagued by the ‘more is more’ conundrum. With 13 tracks and 71-minutes in length, it sometimes feels as if some of the tracks are merely there to take up space. While there’s a diversity of music, with some ballad-y cuts breaking up the scenery, the sheer volume means the band needs to do more than simply provide the usual experience.

While RavenWord’s future is a bit of a question mark, Transcendence offers room for growth should they continue onwards. They have a strong sense for what should work in the genre, and with an album that’s 20-30 minutes shorter, it would provide room for some more standout moments, instead of tracks being get lost in the mix.