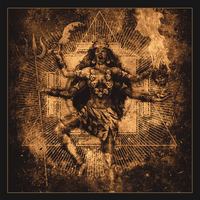 The somewhat unheralded Raventale are a Ukraine band that maybe don’t get the love that the other more well-known black metal acts from that country do. And that chaps my hide. Steadily releasing albums since 2006, this melodic black/doom metal band crafted what this writer regards as one of the finest albums that the black/pagan genre has ever seen with the 2012 masterpiece Transcendence. An album that sits along-side my Walknut album in my little Eastern Bloc pagan black metal Hall of Fame.

For their seventh album, Raventale returns with a little twist in theme. Always keeping things mysterious in feel, it’s not much of a stretch to extend into the dark aspects of far eastern mysticism (Hinduism, for example) on this album. Which is what’s been done on Dark Substance of Dharma.

Starting with a killer intro track, deep with magic and mist, ravens and spells – it pulls the listener in from the get-go into the potent brew of muscular-yet-ethereal, atmospheric dark metal (click the link below for proof). “Destroying The Seeds of Karma” progresses with a plodding, banging riffage that calls to mind Nachtmystium, of all bands. A well-developed song, vocalist Astaroth eventually transforms himself into a bit of a Tibetan monk to conclude the track, which lends a real believability to the album theme. And speaking of Astaroth, his vocal delivery across the album is fierce and rich, no clean vocals in this stuff. It also must be mentioned that Astaroth is Raventale. He handles all musical duties for the band. This is a “one-man band” that sure doesn’t seem like it.

Raventale make excellent use of keyboards, employed as that all-important atmosphere enhancer, always lending the music that extra supernatural quality that the band is known for. They shine as background chords underneath the bashing drums and overdriven tremolo guitar chords (which can conjure up some of the better moments of Drudkh’s material).

Standout track, and also the title track of this album comes in third, and starts with that omni-present melody and mood, and explodes into a burly groove which shows Raventale’s propensity to seamlessly blend death, doom and black metals with skyward-reaching vibes. “Kali’s Hunger” shows Raventale at their most furious, a maelstrom of blazing speed and venom. The oddly-named “Red Laugh’s Walking” (hey, English ain’t the native tongue here, OK?) is a serviceable track that keeps the album’s dominant mid-tempos rolling along. “I am the Black Tara” brings a sense of closing glory to the record, lingering with an affective melody – one which could be a closer in it’s own right. But that honor is left to “Last Moon Fermata”- one that begins with pensive piano, and rolls into another slab of catchy, head-bangin’, big-guitar, fat drums, mood-drenched stuff. It’s Raventale, through and through – each song in its place, each song representing the band well. And what the band represents is something special, and something to celebrate.