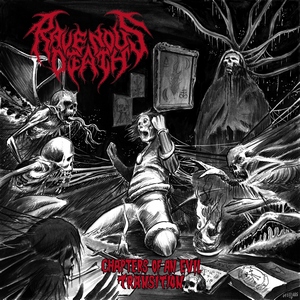 When there’s death in the name of the band, it does tend to give away a bit of what sound they are going for, and Mexico’s Ravenous Death is no exception. A relatively new act onto the scene, though comprised of members with a pretty extensive Metal Archives resume, the band has previously released only a 5-song EP by the name of Ominous Deathcult. As their debut, Chapters of an Evil Transition stands strong in a world where bands seemingly run either ‘old school’ or ‘tech.’

While there’s definitely some ‘90s death metal flair to what Ravenous Death sounds like, it’s not a simple throwback release. Outside of the usual suspects when it comes to bands like this, some more underground influences such as Vomitory (hence the band name), Séance, and Demigod can be conjured up. Yet the band doesn’t sound like a simple copy and paste either, which might be its greatest strength. It’s one thing to emulate your influences but Ravenous Death goes all the way in and cultivates a vibe that has more unique characteristics. That said, this is raging death metal through and through – heaviness and brutality are of the utmost importance, but the band is also capable of displaying some melody to keep it interesting. “The Sinister Being” may ring in a number of blast beats, but some slowdown and moody riffs make it a far more interesting and dark track, and “Harvesting Hate” has some groovy, mid-tempo stuff going on to give the listener something to grasp onto besides pure feral energy.

Chapters of an Evil Transition is the type of album that some modern death metal bands have simply forgotten how to make. A combination of sinister sounding riffs that still has some catchy undertones to it, while avoiding sounding exactly like a combination of collective influences.