Ravenia – Beyond the Walls of Death (Inner Wound Recordings) 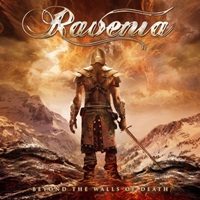 Finland’s Ravenia are a relative new entity for these ears- coming together in 2013 and releasing their premiere Wingless EP (is a two-track effort truly an EP or a single these days?) the subsequent year before Inner Wound scooped up the nine-piece for their first full-length record. Beyond the Walls of Death contains 8 songs of what can be best described as ‘film score metal’ (their words, not mine) – certainly symphonic, cinematic, and operatic in terms of the arrangements, melodies, and theme construction.

Pushing the violin, viola, cello, and contrabass instrumentation are five of the members – and often their work takes center stage over the normal metal proceedings, as “There is but One Path” and “For Those We Forsakened” harken to visions of grandiose battle scenes from medieval times where the warrior saves the damsel in distress. Armi Paivinen has a lot of Tarja/Nightwish textures for her melody choices, drawing out verses for more drama and heighten emotional lows to highs for the slow marching “Into Oblivion” or heavier “When Darkness Reigns”. The multi-layered approach Ravenia takes often leads to backburner treatment for drummer Veikko Ringvall and guitarist Samuli Reinikainen, as a lot of these 6-8 minute arrangements favor the orchestral moments while the metal section gets a cursory look over (the circus-like “We All Died for Honor” fits this bill).

Ravenia lose this scribe’s interest level quickly – because unlike who they aspire to be in Nightwish or Epica, their mentors know that hooks are key to gaining long-lasting appeal in your material. Much of these songs float in the brain matter without really sticking, aurally passable and yet utterly forgettable. In a genre where others are expanding horizons through cultural, folk, or even extreme textures, Beyond the Walls of Death leans more to the classical/film score side and less about the metal, rendering the almost hour-long playback tedious.

They can’t all be home runs in the film score metal realm, can they?