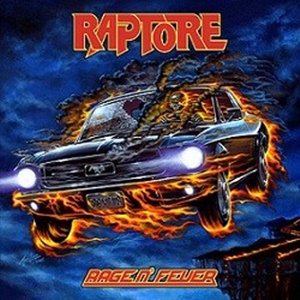 The South American metal scene has been described by domestic and international acts as quite hot, passionate, and explosive. Raptore as one of the domestic hopefuls to make an impact hail from Argentina, issuing a demo in 2014 before coming in with their Rage ‘N Fever debut full-length. Originally seeing a release in Argentina through Total Desaster Productions, German label Witches Brew picked it up for broader European/worldwide exposure. The four-piece that recorded this album has since pared down to a trio (second guitarist Ignacio Irigoin and drummer Germán Bobbera leaving, securing latest drummer Julián Hernández), but in the end, this is an unabashed traditional metal outing, channeling the twin harmonies, pumping bass, and high octane singing plus screams that defined much of the British/early American 80’s scene.

Familiar strains hit when hearing one of the main guitar riffs in the opening title track – a mid-tempo anthem with a gang-oriented chorus but the spirit of Anthrax “Caught in a Mosh” rings through that bouncy chord combination. Other times Raptore push the tempos and throw in crunchier passages – the lead breaks aligning well with their melodic tendencies, a killer fusion of Metallica finesse and Iron Maiden-like execution, most evident on “Evil Hand”. What is mostly enjoyable about the pacing of the record is the comfort level these musicians have in going from faster to mid-tempo arrangements, settling into strong, head banging chord combinations and complimentary rhythm parts that make the audience one with the action. Cuts such as “Time Has Come” and “Back in the Oven” possess that Teutonic atmosphere, Grave Digger meeting Accept where the simplified chorus and key hooks go down so smooth.

Guitarist Nico Cattoni has a vocal delivery that will be an acquired taste for some or a turn off for others. It’s not that scream-oriented or growly, you can just tell that he’s not a purely trained singer that can hit the Halford/Dickinson air raid range. For the most part, it didn’t deter my enjoyment of the record- but it is the weakest point of the outing (the ballad “The Flame” slightly cringe-worthy in the verses), and may be food for thought for the band to seek out a stronger singer down the line. And it’s nice to hear a twin guitar-attack makeover for the Venom classic “Witching Hour” – well in line with Raptore’s attitude and take on the scene.

Rage ‘N Fever does a decent job of channeling that pent up frustration and releasing it in a healthy manner to come away refreshed.