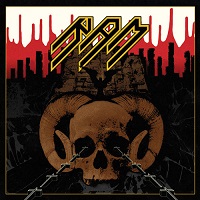 If only more names were as simple as “Ram.” It might even be the easiest name to utter in metal history, and perhaps the Swedes aren’t very fond of syllables, with Death being the title of their third full-length. Nevertheless, Ram does throwback metal as well as anyone, picking its spots from the catalogs of Rainbow, Judas Priest, UFO, and just about ever pre-power metal band that hit in the early 80’s. The end result is an authentic, awfully memorable album…notwithstanding the lack of syllables.

The band aims right for the pocket of Rainbow’s heavier moments (think Rising) and Priest before they fancied FM radio (see: Stained Class and Hell Bent For Leather). The gallantry of the bulk of these songs

is palpable; creating an aura that effectively reaches back for a time when the onus was on actual songs without unnecessary garnishments, just check out “Frozen,” which is basically the band’s own “Heaven and Hell.”

Additional cuts that stick out include the galloping “…Comes From the Mouth Beyond,” and “Defiant,” where Maiden melodies mesh with singer

Oscar Carlquist’s vocal bravado. Plus, the verse riff is god-like. “Under the Scythe” is the album’s sole speedy outburst, sandwiched between the aforementioned “Frozen” and “Hypnos,” which is one of those waiting-in-the-weeds-to-strike songs that benefits from Carlquist’s leather-lunged vocal approach.

Quite difficult to elude the pull of retro metal these days, and while Ram may find themselves having to duke it out with lesser bands

, they’ve certainly have a massive winner on their hands with Death. There’s no real razzle-dazzle to what the Swedes are doing, it might just be a matter of having better songs than their contemporaries. It’s elementary…kind of like their name and album title. Get this.