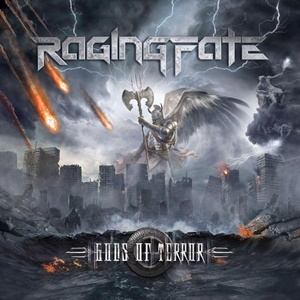 Another Swedish upstart with a debut album in Gods of Terror that feels steeped in that older German power metal platform, recorded by a duo with one musician most won’t know (Mattias Lövdal on vocals, bass, and guitars) and another who has a rich history in the scene with Ronny Milianowicz. Ronny has done work as a drummer with Sinergy and Dionysus, plus vocal support on records from Amon Amarth, Dragonforce, and Hammerfall to name a few. It’s obvious after a few spins with these ten songs that Raging Fate aren’t aiming to reinvent the power metal wheel, but rather spin along to its conventions, it’s distinct spirit and attitude that cause constant headbanging and crushing anthems to tumble from the sky.

Those familiar with the style will probably know the major bullet points that songs like “Tombstone” and the title cut build upon – a steady supply of culturally catchy guitar action, the relentless tempo charge that keeps the energy flow at peak capacity, and the transition/instrumental moments that evoke audience choir participation at one beer or twelve. Running Wild, early Helloween, and Grave Digger represent the three biggest aural comparisons, although the epic side comes out for the seven-minute plus “Shores in Flames”, where the echoing rhythm riff has this ominous, almost Metallica-like approach. When Raging Fate choose to keep the proceedings in more of a mid-tempo arrangement, the results can be quite exciting as far as more intriguing transitions, as “Vampire” represents late 80’s Teutonic gold, something that would be a delight for Rage and Grave Digger maniacs.

Mattias has a clearer presence in the musical department, while his vocal delivery is adequate a la Peavy from Rage without the strength of say a Michael Kiske or Ralf Scheepers. It’s more of that sneering/talk approach that keeps things down to earth, making “A Bitter Man’s Fate” and “Evilization” have that thrash edge as opposed to a soaring, air raid siren holding down the microphone. Add in the armored, axe-wielding giant over the destructive scene on the cover (visions of the recent The Rise of Chaos / Accept cover abound) and you can rest easy knowing Gods of Terror keeps old school European power metal alive and breathing.