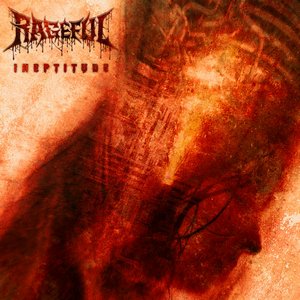 As the name would imply, Portugal’s Rageful aren’t exactly a ushering in a pleasant and happy vibe. The band’s first full-length, released at the tail end of last year, does one thing and it does it incredibly well: unbridled death metal. Immediate and frantic in tone, Ineptitude is pure fury and chaos, and delivers a potent experience in that regard.

Much of Rageful’s sound can be traced to the ‘90s death metal scene, but with a modern production update, so it doesn’t sound like it came from then. But the influence of acts like Cannibal Corpse and Malevolent Creation is unmistakable. The one place that does add a bit of a different vibe is the fretless bass (see “Slavery Ways”), and brings in a bit more modern polish, but other than that, the attack is pretty furious and unrelenting. The band is good about changing up the pace though, and instead of simply drilling high speeds into your brain, they flex some more mid-tempo muscle. This change allows for the solos to flourish a bit more, as well as bringing in some subtle grooves/melodies into the mix too. “Unsocial Network” can groove as much as it can sledgehammer, and the grooves give it the flash to stick with you after listening. Some tracks do simply streamroll, such as the aptly titled “The Rage is Coming,” which acts as a short burst of adrenaline as the tempos and riffs fly.

It does stick to the death metal template before it, but Ineptitude polishes the edges to a favorable degree. It’s got lots of aggressive oomph to it as well as some melodic solos and grooves, and the combination of the two gives them plenty of play to be had. Just solid death metal, start to finish.