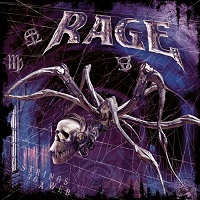 Power trios place intense focus on hooks and chemistry. You can’t have a weak link amongst the vocals, guitars, bass or drums, which probably explains the appeal of Rage through the years. Their brand of power/speed metal has a decidedly German anthem-like approach, even when they experiment from time to time with broader, more orchestral-laden material.

Veterans of the scene since the mid 1980’s, Strings to a Web illustrates a three-piece act adept at grasping all the necessary dynamic nuances to make a complete front to back listening experience. The early tracks like “Hunter & Prey” and “Into the Light” focus more on pulsating attack riffs and steady mid-tempo to slightly higher drum tempos, while Peavy’s engaging melodies grab your ears instantly. “Empty Hollow” and “Empty Hollow Reprise” capture the audience in a larger, grandiose or thematic nature with once again sweeping classical instrumentation sitting side by side with the electric music.

Drummer Andre Hilgers (Axxis) has more of an open, playful nature to his fills – best example being the tension filled instrumental title track which gives all three players a chance to flex their instrumental muscles. Guitarist Victor Smolski delves deeper into his bag of tricks I believe with this album, especially on a more blues-based effort such as “Saviour of the Dead” which has more of The Scorpions circa “The Zoo” feel through its main riff.

Rage suffer from the Armored Saint syndrome within their genre class. They aren’t overly happy in their stance a la many Finnish or Italian acts, and yet aren’t light enough for the more melodic crowd to fully embrace them. No matter to me – Stings to a Web has a 14 song

tracklisting that will outlast 90% of the new power albums coming down the release bins this season. 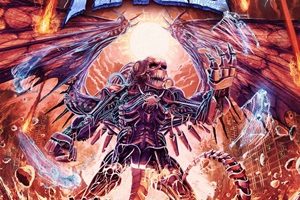