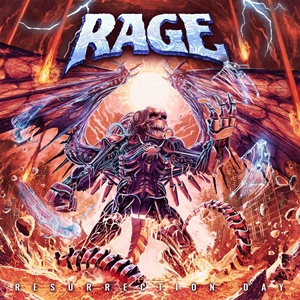 Establishing their trade in the heavy/power/speed metal scene since the 1980’s, German act Rage have expanded back into a quartet lineup for their latest record Resurrection Day – a first since 1999’s Ghosts effort. At this point in their lengthy career, these musicians might as well make themselves happy first, opening options for the listener to take in a wide array of textures and tools at their disposal. Continuing the path of delivering a mix of power, speed, thrash, and traditional material, these twelve cuts showcase a catchy sound chock-full of muscle and might, heaviness and melodies done as Rage feels confident executing.

Supplementing the basic guitar, bass, and drum instrumentation with additional orchestration support from Pepe Herrero on specific cuts, the record has a tight, sharp atmosphere that flows in an energetic manner song to song. Heavier/faster songs set the stage for more mid-tempo/moodier affairs as the record unfolds, allowing the listener to absorb a dynamic set of material that never loses impact. The bass/drumming attack on “Virginity” from Peavy Wagner and Vassilios ‘Lucky’ Maniatopoulos volleys between groovy meets power/thrash passages, while hitting all the classic tight transition requirements during the straightforward, harmony fueled “The Age of Reason”. Surrounding himself with younger musicians on guitar like Stefan Weber and Jean Bormann allow them to pull in a diverse selection of influences: Yngwie Malmsteen and Zakk Wylde to even classic hard rock, thrash, and extreme artists come into play for riffs, twin harmonies, even the emotive to fluid soloing that make the stomping “Monetary Gods”, Celtic-like “Traveling Through Time” and triumphant title track instant favorites. Beyond the poignant philosophical/psychological commentary thread running throughout the record, as a vocalist Peavy knows how to make his delivery potent and memorable – his domestic bite metal to the bone.

Resurrection Day appears to be another solid set of material that builds off the previous Wings of Rage perhaps in a stronger fashion – the dual guitar use opening bigger aural possibilities, while the youthful invigoration possibly garnering more attention from a second/third generation of metalheads. This record isn’t a bad introduction if you have been out of the loop on this fine German institution.