Quickstrike – None of a Kind (Rockshots Records) 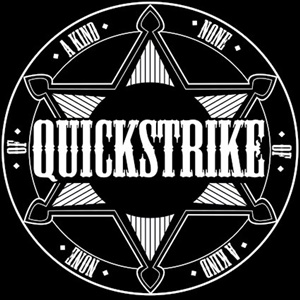 Thanks to the proliferation of documentaries, bio pictures, and spotlight on the roots of classic hard rock/metal, a bevy of younger musicians feel inspired to take that plunge into developing original material in that vein. Welcome Latvian act Quickstrike to that club – together since 2017 and arriving at their debut album None of a Kind, putting in three years’ work as they gained seasoning through high quality gigs as well as biker festivals across Europe. Expect a raw, authentic feel to the sound – keeping the material very tight, focused, and aligning well with a bluesy based, primitive nature that intertwines heroes of the 70’s/80’s with a bit of edgy flair to keep things cemented in modern times.

The main attack of the quintet is straightforward in bluesy/sleazy-based riffs, simplified choruses with gang-oriented background vocal support, and tempos that get audiences swinging, clapping, and stomping along to the grooves. The crunchy drum/guitar interplay for “Saint” and punk-ish vocal/up-tempo musical charge for “Nice Hair, Bad Habits” revel in that time of late 80’s/early 90’s bands like Guns ‘n’ Roses, Faster Pussycat, etc. if given a bit more of a modern angst in specific licks or attitude. At certain spots you may hear similar reference points to classic metal – the intro kick/cymbal attack for “Thorn” having a distant “Run to the Hills” feel before just hitting a solid 4/4 groove in the main passages, while opener “Real Rock Disaster” has a few guitar bends and measures that older Dokken followers may dig. The faster nature of “Rebel Radio” could be a rallying cry for the audience – more potent guitar chords match the verbal intensity and speedy word spew vocally to keep the troops satisfied.

The main struggle for enjoyment lies in the vocal delivery and awkward strained nature to specific note choices from singer ‘Piggy’. He has a semi-shouting, nasally nature that coupled with his phrasing and accent can sound like a glam meets punk crooner not necessarily able to hit the right atmosphere in all the songs. He wants to have the charisma of Tamie Downes or Axl Rose during “Cheats N’ Liars” – instead coming off as a monotone-laden screecher that can be a distraction to the catchy musical proceedings. Quickstrike possesses proper skill sets in the style and songwriting for None of a Kind – if only they can work out the vocal kinks for follow-up records.