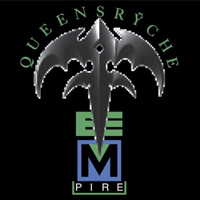 How to follow-up the best metal concept album of all-time…that would be Empire. As Queenryche’s rating exploded in the late 80’s after Operation: Mindcrime, the right move was to streamline the band just by a hair, while keeping their metal roots intact, something that rings resoundingly clear on the 20th anniversary reissue of Empire. Through all of the radio singles and “hits,” Empire is a stout, steely album, one of the last vestiges of when they were a full-fledged metal band. To celebrate its 20th anniversary, it’s getting the reissue treatment via a new mastering job, bonus tracks, and an unreleased live set.

Aside from the obvious songs like “Silent Lucidity,” “Jet City Woman,” “Another Rainy Night (Without You)” and “Empire,” the album has unheralded tracks in the form of “The Thin Line,” and “Resistance,” both of which demonstrate the tip-top songwriting tandem of guitarist Chris DeGarmo and singer Geoff Tate. Album closer “Anybody Listening?” also falls into that category, with Tate showing off his tender vocal side.

Bonus tracks include “Last Time In Paris,” a cover of Simon and Garfunkel’s “Scarborough Fair” and the throwaway “Dirty Lil’ Secret.” A remastering job has given the album some extra punch, but nothing to startling effect.

The second disc comprises of a live set recorded in November of 1990 at the legendary Hammersmith Odeon in London. Leaning heavily on Empire (“Silent Lucidity” gets a rather warm reception), the band sounds as pristine as ever especially on “Walk In the Shadows” and the always-marvelous “Roads To Madness.” Set closer “Take Hold of the Flame” serves as a reminder of Tate’s hulking vocal power, hitting notes that few in metal would even dare to reach.

The inclination would be to reissue Operation: Mindcrime considering how excellent and influential it is, but credit Queensryche for recognizing Empire is the more popular album on a consumer level (note: consumer not critical). In terms of anniversary editions, it’s hard to go wrong with this, as revamped packaging prove there is a lot more to weight to this era of the band than “Silent Lucidity,” which still gets spins on FM Radio.