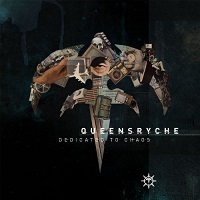 As expected, Dedicated To Chaos couldn’t be a further cry from Queensryche’s hardened cerebral metal days. They’re not interested in that anymore, especially singer

Geoff Tate who hates metal as much as yours truly hates vegetables. This doesn’t negate the type of band Queensryche is nowadays (i.e. a plain ‘ole “rock” band), but at this stage in their career, albums like this are only going to make their fans clamor even more for the days of yore. And that’s not what Queensryche wants. They want you to be in the “now” with them.

Without a real parallel in the band’s career to draw from (although we could make a play for 1997’s worthless Hear In the Now Frontier), Dedicated To Chaos has absolutely no muscle. Instead, it wiggles in its way into the mainframe of FM radio, especially on the peppy commercial

rock boogie of opener “Get Started.” “Hot Spot Junkie” is mildly redeeming, with Tate spouting off about modern technology, while the goofy “Wot We Do” is a throwaway and “Around the World” feels like a song tailor-made for a world peace infomercial.

Tate isn’t the problem here, for his vocals still have an enormous amount of snap to them, as evidenced by the cool harmonies on display during “Higher,” which are nearly cancelled out by a saxophone solo. In spite of its title, “Retail Therapy” is one of the more “hard” songs

No one is going to find fault with a band wanting to move forward and experiment, yet Queensryche remains forever polarized by these exact moves. This is a band that was once predicated on being smarter and more self-aware than everyone else…Dedicated To Chaos demonstrates none of that. Instead, it sounds like a bunch of old guys trying to become hip by snapping up the newest iPhone

and teenage lingo, only to find that it’s a lot harder to be cool than they initially thought.