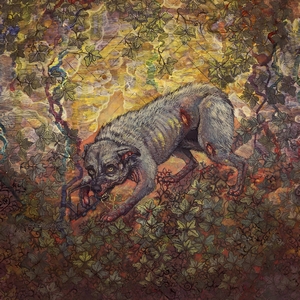 Already the very definition of outré by the time that their sophomore release, The Mother of Virtues, hit the streets back in 2014, Pyrrhon is one of those bands that continues to excite and make you wonder where they will go next. After two EPs in the last two years, the band is set to release their third full-length, and it delivers everything you’d imagine from the act.

If you haven’t heard any Pyrrhon prior, it’s not the type of music that you can just put on and listen to it carefree. It’s dense, angular, and does a lot of changes on the fly. If you took the noise-making from Today is the Day, coupled it with the death/grind of Cephalic Carnage or Human Remains, and some of the skronky feel of bands like Gorguts and Ulcerate, you may have a starting point for what to expect. If there’s one thing that can be said for Pyrrhon, it’s that despite their frantic, and near batshit crazy sound that they have at times, they don’t sound too much like anyone else. They can move from a brutal, death metal enthused climate to a wall of sound to frantic, techy explosions layered within noisy riffing and a grind mentality. And that’s just “Trash Talk Landfill.” Other cuts explore some doomy/sludge-y elements (“Tennessee”), haunting atmosphere (“Empty Tenement Spirit”), and even some rather spaced-out grind (“The Unraveling I-III”). Then there are the vocals…like his bandmates, Doug Moore is an extreme metal chameleon, taking just about every route one could take through barks, gurgles, shouts, and roars to keep up with the extraordinary changes the music brings. Add this to some of the more intellectually deep lyrics in the genre (check out “Goat Mockery Ritual” and “The Invisible Hand Holds a Whip”), and you’ve got a winning combination.

Pyrrhon continue to be an extreme metal success by being willing to contort themselves into whatever the song desires, instead of simply following genre convention. While it may not be for everyone, those looking for extreme metal that is strongly written and intelligent yet feels abrasive and occasionally claustrophobic are going to soak this one up.