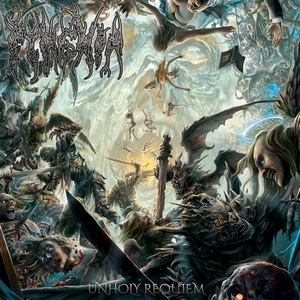 Underdog champions of the NYDM scene, Pyrexia has sometimes suffered from an uneven back catalog. Their early material channeled their peers Suffocation quite a bit, as the scene was just beginning to blossom, and while they have never really ventured too far away from their roots, there have been some noticeable changes as releases have come and gone.

Hailed by the band as a return to their older roots, Unholy Requiem does not disappoint at all with said image. In fact, it’s a rather piss-fueled rage inducer as you listen to it. Just the right about of groove and rapidly accelerating blasts and a tidy 25-minute runtime to ensure that the festivities never feel old or repetitive. In some regards, it’s some of the strongest material that they’ve done in quite some time (the final two tracks, “Unholy Requiem” and “Wrath” are quite menacing indeed). But at the same time, there’s something that holds it back, and that’s the overall sound quality. While they are ‘returning to their roots,’ the production also reeks of early ‘90s. While some may enjoy the nostalgia trip when it comes to the production, it does take away from some of the album’s impact. No one wants a pristine death metal album, but some of the slamming parts tend to fall flat because of it, and the vocals seem way too upfront, to the point of muddling up the riffing.

Unholy Requiem is the type of album that’s bound to sound absolutely monstrous in the live setting. As noted, the songs themselves are brutal as all get-out, but there’s something lost in the translation due to the recording quality. It’s unfortunate, because this could have been a real beast of an album for Pyrexia. As is, it’s one that will definitely appeal to fans of the NYDM style, but not much outside of it. 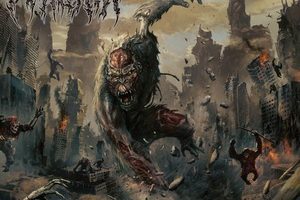