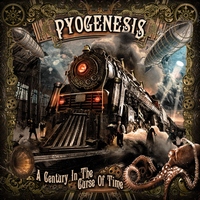 Come the late-90s, many European Gothic metal bands were sucked into the idea they had to change their sound in order to stay relevant with the times. The examples are pretty well-known: The Gathering, Moonspell, Paradise Lost, and Tiamat being the biggest offenders, each with varying degrees of success. (Tiamat probably took the biggest hit out of the four, having evaporated their lush, lavish atmospheric sound by then). Tucked somewhere into an obscure crevice would be Germany’s Pyogenesis, who like their peers, boasted infinite promise as a Gothic doom band, only to gradually veer into alternative rock territories by the close of the 90s. After a 13-year layoff, the Germans are nearly back to their old ways with A Century in the Curse of Time.

A conceptual album about 19th century industrialization, A Century in the Curse of Time brings back the metallic underpinnings of the band’s early 90s period, particularly the much-respected Ignis Creatio EP. But a full-on return to doomy Goth this is not. Instead, Pyogenesis sound not terribly dissimilar to End of Green, their countrymen who are one of the better practitioners of melodic Goth metal/rock. Therefore, the shining chord movements and ear-friendly vocals of Flo Schwartz has its standout moments on “Steam Paves its Way (The Machine)” and most notably, “This Won’t Last Forever.”

The occasional dodgy moment (“Touch the Sky (When the Darkest World Reached Down)” and “The Swan King”) aside, A Century in the Curse of Time is a Euro-friendly, hummable outing. It’s not a full-on blend of Pyogenesis’ mixed bag of a past, yet it’s the right kind of album for the band to make a comeback and reappear in the scene. Furthermore, it’s just good enough to make some forget about the band’s ill-fated sound-altering stretch nearly two decades ago.