Purtenance – …To Spread the Flame of Ancients (Xtreem Music) 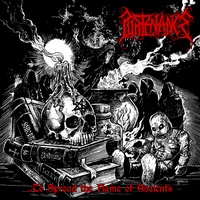 Often overshined by the more melodic output that is always popping out of Finland, it’s death metal scene is none too shabby either. Finnish death metal is beginning to make its way out to the forefront once more in more recent years. Purtenance’s …To Spread the Flame of Ancients is just one more example of why.

Forming all the way back in 1991 and disappearing after one album (seemingly a pretty common theme), Purtenance has time on their side. Their age certainly helps the legitimacy of it all, with much of the band’s sound bringing things back to said era of death metal. Barbaric and speedy riffs are a frequent occurrence, though the band seems more at home in the mid-tempo range. Tracks like “Destroyed Human Mind” are able to weave in some darkened melodies without compromising the brutality when the band takes the tempo down a notch and are some of the highlights of the disc. But if you are looking for destructive riffing, the faster songs like “Perventio” are going to do their best to grab you by the throat. Huge, demonic vocals are the true icing on the cake though, really pushing the brutality forward and providing a visceral edge. Lastly, the production does deserve some mention, as the old school vibe is maintained authentically, but there’s a crisp feel to it as well that keeps it from being too messy.

…To Spread the Flame of Ancients gives you what you demand from a death metal release. There’s brutality, a slight dose of melody to string it together, and an old school feeling without resigning to be stuck in that era. Death metal without compromise.