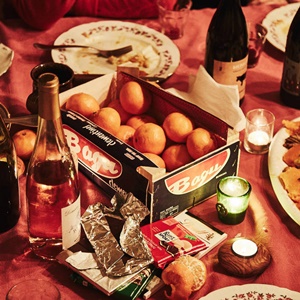 A three-piece outfit from the New Haven, CT area, Purple Hearse certainly have a name that attracts attention from the get go – and hopefully a sound to match. Dinner with the Schnabels is their debut EP, a five-song affair that intertwines a mix of heavy rock, stoner, and doom influences with occasional metal and punk inflections. You can expect a lot of vibrant interplay – drumming that can go from solid groove combination to free flow, almost progressive intensity, bass passages that often fill that gap between holding the bottom end and propelling that second lead line, plus guitar playing that has bluesy inflections while dealing riffs and accents all over the heavy spectrum.

Opener “As I Am” has a bit of that early 70’s/Mountain mammoth sound, the mid-section transforming into a slow instrumental build-up of crushing drum fills, pounding bass, and sinister guitar riffing that Ozzy-era Black Sabbath mavens clamor for. “Mean Queen” meanwhile slinks around at a semi-crawl pace, the vocals having that nasty whiskey-soaked grit, while the instrumentation see-saws between Clutch-like stomp and the Melvins. Lively combinations seem to be Purple Hearse’s main objective – locking quickly onto the musical/vocal hooks, keeping things simplified and then bouncing around to the next arrangement in a quick hitting three minutes and change manner. Embellishing certain voices with spacey sound effects adds nuance and psychedelic flair – especially on the heavier groove accents for “Purple Hearse”. The production values are lean and mean – emphasizing very much what one could expect from the band off the floor and on the stage, probably just at louder volumes depending on the sound system of the venue they are performing at.

Hopefully some of the vocal identity gains a bit more seasoning on the follow-up – there is a semi-whiny nature at times that should be tightened up as it weakens the musical output a touch. Otherwise, Purple Hearse has a potent, lively sound that most stoner/heavy rock followers should dig into.