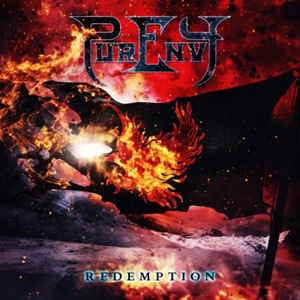 Australia metal bristles with life once again in the form of PurEnvY. Originating from the steel city of Newcastle (not in the UK, another legendary metal hotbed decades prior) – the four-piece develop a style that combines the principles of thrash with a bit of traditional, NWOBHM elements against some modern aspects that could develop multi-generational appeal. They’ve been active over twelve years, releasing their first full-length As the Light Fades in 2013, taking their time to refine their style while getting some more live seasoning in shows. Redemption is the follow-up, another full-length with eight songs and over 50 minutes of headbanging material.

In a scene flooded with bands attempting to put their own stamp on what’s already been developed for genres, PurEnvY have a couple of distinction markers beyond their clever use of lower and upper case lettering for their moniker (plus the shared use of the E for Pure-envy). Both guitarists in Adam Kiefel and Josip Malkoc also share in the vocal duties – handling the wide swath of melodic/clean action as well as the necessary screams and anger-filled roar/growl moments that come across during the varied mid-tempo to speed riffing activities. When it comes to the riffing and general tempos from the band, they definitely favor a stop/start into gallop approach fueled by loads of exhilarating triplet power parts – the type that put early Metallica and Iced Earth on the map. Check out the blitzkrieg snare/double kick action against the fleet of finger twin harmonies and steamroller rhythms for “Embodied by Dust” – the relatively straightforward half-time transition in line with Trivium, while Adam and Josip deliver a unison clean vocal harmony that should have crowds joining along for the festivities. Many times the instrumental sections take on that uplifting slant where you feel like air strumming along – most notably the closing section of “End of Days” for this Maiden-like maneuver, or the opening Dave Lewsam bass line for the subsequent “Blood of the Innocent” that sets up some culturally driven musical themes.

There’s plenty of musicianship to sway PurEnvy into many corners of the melodic thrash or traditional spectrum – as well as the occasional caustic screams and modern attack nuances that the younger generation favors in their metal. Redemption takes those varied influences, tacks on some killer dual guitar and vocal harmonies, and delivers another independent product that stands firmly on its own away from the typical Exodus/Testament worship crowd.