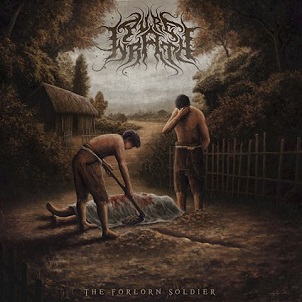 Not too often something from Southeast Asia, in particular, Indonesia, graces this site, so it’s probably a wise move to pay attention if the stalwart Debemur Morti is releasing it. Pure Wrath is the one-man product of Januaryo Hardy, a multi-instrumentalist who launched the band in 2014. Outside of the lyrical themes (which we’ll dive into momentarily), Pure Wrath has largely a Scandinavian sound with little traces of what would constitute a Southeast Asian black metal approach. Whatever that would sound like is anyone’s guess, but, the reality of the matter is Pure Wrath goes the all-encompassing atmospheric route to great effect on their three-song The Forlorn Soldier EP.

The EP details the 1960s genocide in Indonesia where male members of a family suddenly vanished at the hands of the country’s army in the name of “nationalism.” Such topics are usually not explored within the realm of black metal, thus, turning Pure Wrath away from the mystical to the human. The songs, as expected, are long and winding, topped off by a surplus of darting melodies and crisp keyboard arrangements. Hardy wisely works in some dynamics by way of a well-placed clean guitar segment on “Children of the Homeland” that oddly recalls Winterfylleth, while session drummer Yurii Kononov is in constant motion, bashing the songs with dexterous drum work.

For an EP, The Forlorn Solider is impeccably deep — you wouldn’t be wrong if you considered the thing a genuine full-length. Through it all, Pure Wrath has cranked out three songs charged with emotion that is a stark reminder of how brutal totalitarian regimes can be.