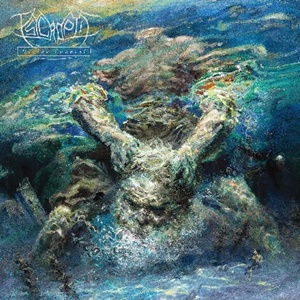 Two decades active in their technical death metal ways, Psycroptic continues to evolve as options, inspiration, and new tools come into the mix. For this latest album Divine Council, beyond the supplemental female vocals of Amy Wiles that are already familiar to followers of 2018’s As the Kingdom Drowns, a third deadly voice with Origin singer Jason Keyser joins in explosive larynx busting glory. Ultimately the savage rhythms, precision musicianship, intense rhythm section mechanics, plus the varied vocal threats paint another vibrant record that intensely pummels from start to finish, while offering sick hooks for incessant headbanging bursts.

Stunted picking next to fierce double kick/snare underpinning pushes “Rend Asunder” into undeniable jackhammer, limb severing status. The guitar work from Joe Haley possesses deadly finesse, ripping parts, plus a semblance of groove amid the multitude of progressive and groove/death angles he takes. Even when going at a slower, almost industrial-like pacing for the opening sequence of “Enslavement”, his choice of extended accents builds outward into this cascading heavy flow that forces spasmodic convulsions of the brain, body, and soul. Recording at various locations in Australia and North America because of the pandemic, you’d never feel based on the piecemeal process that these musicians weren’t together in the studio as one – every detail from dual screams during “Ashes of Our Empire” to the darker synth strains against fading drums for closer “Exitus” ideal to set the right mood of the individual arrangements. Favorites mutate depending on the day – the moodier “Awakening” and thrash-oriented technical death sidewinding “A Fool’s Errand” currently receiving plenty of devil’s horns salutes.

Executing nine tracks in a tidy under forty-minute offering, Divine Council presents just enough musical information to absorb while not burying the listener in excessive, over-bloated madness. Psycroptic remains at the top of the game for this style, and that’s all one could hope for from an act with such a long pedigree for the movement.