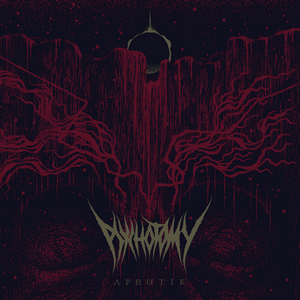 With wave after wave of murky death metal coming through the inbox on a daily basis, it’s tough for bands to really stick out within said field. The altars of Morbid Angel, Incantation, and Immolation have become rather bountiful due to the dark and dreary aesthetic (perhaps in contrast to the much shinier rising tech death scene). Psychotomy may have started their existence in more of a thrashy plane, but Aphotik absolutely reeks of pure and glorious death metal.

Perhaps the strongest element of Psychotomy is how you can tell the influences of the afore-mentioned bands are there, but it’s not as blatantly obvious as much of the current scene. Perhaps it’s their merger into the scene from the thrash side of things, but they do retain more of their own vibes in each song. Everything from blazing fast to lumbering crawls are included, and the grittiness remains evenly dispersed. There’s even a bit of dissonance added into the mix in some tracks, yet not to the point where it becomes the main feature. Aphotik feels like death metal through and through, with the darkened and dissonant vibes adding some fresh colors to the feel (closer “Lethe” being an excellent example). Plus, the brutality of it all manages to be relentless without becoming blurry. Songs like “Witness of Void” feature some scathing riffs and venomous vocals, but there’s still a bit of a hook to hold onto, calling you back to a particular track.

First-rate death metal here by Psychotomy. Without going outside the usual confines of the genre, they still manage to find a way to keep things exciting and energetic. As such, Aphotik won’t have much trouble pleasing those looking for some new extreme metal to latch onto.