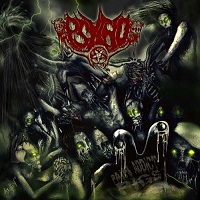 As the name would suggest, this is not the most polished of recordings, which when taken into account how clean most albums sound these days, is a welcome reprieve. For Singapore’s Psycho, staying firmly rooted in the Venom/Bathory/proto death metal days is their modus operandi, and Pain Addict Pigs (what is a “pain addict pig” by the way?) is crude, rude, and full attitude. Rhyming is good times.

Fronted by Penny Torture (she of the female variety), Psycho is adept at kicking out some thrash-worthy jams, specifically the not-so tight “All Are Dead,” which recalls Destruction when the metronome wasn’t even a consideration. Torture is all over most of these songs, oftentimes letting out a one-dimensional spit that gets tiring right from the word “go.” Nevertheless, she does add a feral, 80s metal dimension to the proceedings that at least gives Psycho a unique platform to stand on next to the fact they’re from Singapore.

The band also flirts with early Morbid Angel on “Meat Slit Grinder,” and the grinding “Dr Satan” opens with the prerequisite “Hail Satan!” call-to-arms. Once to that point in the album, it’s quite evident that Pain Addict Pigs isn’t quite there in terms of being able to admirably hoist the (blood-filled) chalice of treasured 80s thrash and death metal. Nevertheless, more bands from the isolated region of Singapore can’t hurt, can it?