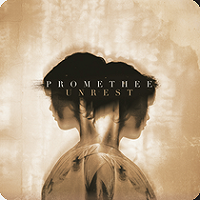 A bit unnerving to see dude-man-bro-down metalcore/djent ‘core makes it way over to Switzerland, you know? We’ve yet to quarantine the style over here in America, so when it travels over the Atlantic and into a country with a typically strong metal background, the results are sure to be iffy. And they are, as Promethee rolls out the pale, staid carpet for a mish-mash of sounds that somewhat, but not really coagulate into something cohesive, yet after a spin (or several), you’re left wondering where Unrest’s ideas, no less the songs are.

Originally released independently, but picked up by Lifeforce, Unrest gets up there with 12 tunes at 50 minutes, with for the sake of attention spans and the preponderance of angry-guy vocals, is a bit too much. The biggest offender in all of this is vocalist Joshua Orsi, who like so many of his peers, has yet to figure out when to head back to the drum riser to take a break, let alone allow for the music to breath. He’s got ‘yer classic really-jacked vocal thing going on; no variation, just a lot of meter-pushing, which means reach for the honey and tea, right away.

The band’s riff action is usually around dissonant territory, with the spare, remote bright melody coming and going as they please. But aside from Orsi, there’s no separation between any of these tracks; you’ll feel like you’re getting yelled at from the across the ocean while discarded Tessaract ideas are being used at will. So clearly, Unrest is a big mess all around, a collection of jams without much aim or purpose other than to hitch onto the wagon of 2011-2012 and hope folks are still holding out for the next djent push, which thankfully, isn’t coming any time soon.