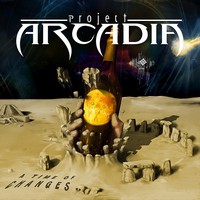 Quite the misleading band name, ya know? Project Arcadia isn’t much of a “project” as it is a Bulgarian outfit fronted by the ever-awesome Urban Breed, he of Tad Morose, Bloodbound, and currently, Trail of Murder fame. Prior to Breed joining, the band released From the Desert of Desire in 2012 to rather muted results, as in, no one on this side of the pond gave a flying toss. Sure enough, add Breed to the fold, record a new album in the form of A Time of Changes, and viola, Nightmare Records takes care of the rest. Not a bad deal.

Hovering around traditional power metal and 80s metal protocol (the accompanying bio cites MSG and the Scorpions, which there is scant correlation), Project Arcadia wisely focus on the considerable vocal talents of Mr. Breed. He’s given ample breathing room to allow for his superbly melodic and hefty pipes to get their kicks, like on the soaring chorus for “I Am Alive,” and the acoustic-led “The Ungrateful Child,” which sees the Swede go full-on tender. But for the most part, the band plays it muscular, hitting some brute riffs in stride on “Formidable Foe” or finding some double-bass happenings on opener “Here to Learn.”

The addition of Breed is sure to bolster Project Arcadia’s profile immediately. However, being that Breed is also known for being a bit of metallic nomadic, one had to wonder how long he’ll stick it out with the band. But the songs are certainly here on A Time of Changes, suited perfectly for Breed, who ten years after his shining moment on Tad Morose’s Modus Vivendi, can still hang with the best of ‘em. If the Swede was smart (and he is), he’ll stick with this, and Trail of Murder and keep on being productive…