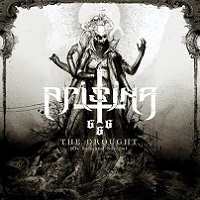 Pretty big in scope, Pristina’s The Drought (ov Salt and Sorrow)brandishes the big ‘ole flamethrower that is near the likes of Today Is the Day and other metallic, post-hardcore aficionados. Anchored by an ambitious, 23-minute title-track, The Drought, is perhaps indicative of what Pristina (who by the way, feature former members of Dry Kill Logic, Invocation of Nehek, and100 Demons) is capable of if given the opportunity to show

their wares via a full-length.

Lots of crunch here, specifically in the guitar department and on standout song

“Salt Water Cthulu,” which is as simple as it is effective, without venturing into straight-hardcore territory. Rather, the song is a powerful churner, which also applies to the band’s cover of Today Is the Day’s “Temple of the Morning Star,” a song that seemingly fits right in Pristina’s wheelhouse, especially since the band is apt to toss in some acoustic guitar bits at the drop of a hat.

The alubm has two bookends in the form of opener “Moonshiner,” and the aforementioned 23-minute title track. “Moonshiner” is a sometimes jumbled, but always in-motion song, with some well-placed acoustic guitars to complement the band’s rangy display of hard-edged riffs. “The Drought” ends things on a climatic, if not morose note, as somber acoustic guitars slowly edge away a song that one can safely call “epic,” especially since it contains a drum solo. No one does those anymore.

Considering the various backgrounds of those involved (who would have thought someone from Dry Kill Logic would pop out something like this?), The Drought (ov Salt and Sorrow) is a varied, if not enticing melodic prospect. Best of all, Pristina doesn’t do just one thing good – they do a lot of things good which, as mentioned above, definitely piques interest for another proper full-length.