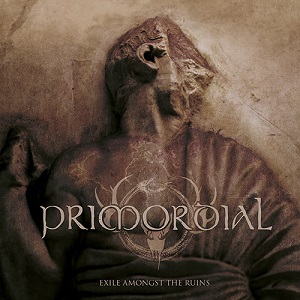 The richness and expanse of Primordial’s career — now spanning 25 years — is often underscored upon the release of a new album. It was certainly easy to vouch for and get behind 2014’s triumphantly sullen (indeed) Where Greater Men Have Fallen; Exile Among the Ruins looks to go above and beyond, penetrating the furthest climbs of the band’s Irish heritage while shedding light on the misdeeds of the powers that be. Beyond that, the album’s eight cuts each strike individually in a way that recalls of the band’s first real triumph, 2000’s Spirit the Earth Aflame.

As ever, vocalist A.A. Nemtheanga is leading the charge, painting these songs with colors only he can. The man’s unique vocal thrust still has few equals, enabling him to exhort and practically dominate cuts like opener “Nail Their Tongues” and the sprawling “Where Lie the Gods,” a hereby slow epic churner. But, look to the back-end of “Upon Our Spiritual Deathbed” for the man’s best work — a carrying, melodically glorious salvo that relishes glory and might, the near-perfect execution of pagan metal in which the band draws upon.

Whether it’s through manic, tempo-driving corridors of “To Hell or the Hangman,” the ominous title track, prowling “Sunken Lungs” or dark, airy closer “Last Call,” Primordial has assembled a hearty, thought-provoking batch of songs. But, back to the matter at hand: Now a fully-vested veteran metal band, Primordial’s creative urgency or even juices, for that matter, feel as sparked as ever, like, the Irishmen are still staring down the barrel of a gun, waiting to see who will blink first. It won’t be them. Exile Among the Ruins is superlative.