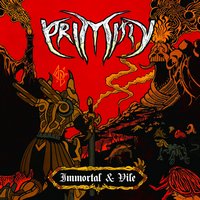 Hailing from India, the aptly-named Primitiv isn’t out to showboat or run technical circles around the rest of the death metal world. Instead, Immortal & Vile wants you to take it slow and ride on the groove of their death metal riffage. The type of album that focuses all of its energy on crushing the listener instead of trying to impress them.

If it can be summed up in one way, Primitiv is all about the groove. And when you mostly stick to the mid-tempo to plodding range, your riffs had best be up to snuff. This is why Primitiv does succeed in their goals as opposed to falling short. A seeming combination of Bolt Thrower, Jungle Rot, and Black Sabbath, the sound does indeed feel like a mash-up of no-compromise death metal with some psychedelia of ‘70s doom. So it’s a blast from the past for sure, but at least they avoid the ‘everybody’s doing it’ Swedish death metal route. In terms of the songs themselves, you are ushered in (after the introduction) with the mid-tempo banger of “World War Zero,” which is an apt indication of what you are going to hear. Later on, “Lake Rancid” does provide a nice melodic lead to change things up and “Taurus” lays heavily down on the doom groove in a very headbang-friendly way. “Lords of the Primitiv” rounds out the slow and steady march of death/doom just as consistently as it started, with some of the stronger riffs of the album.

While a few upticks in speed might be nice for dynamic, Primitiv does have strong enough background in their death/doom groove to keep you intrigued. It’s a surprisingly fun ride while it lasts and does effectively reach its seeming modus operandi.