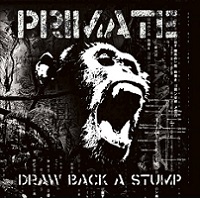 Originally released last year and now getting the reissue/repackaging treatment via Relapse, Primate’s Draw Back A Stump debut isn’t exactly the Brutal Truth-meets-Mastodon exercise that many had figured would be laid since, you know, Primate has members of Brutal Truth and Mastodon in its ranks. Rather, the album is telling of the band’s name. This is primitive, d-beat and crust-inspired grind that plays it a little too close to the vest, which sort of runs against the whole “side project” thing. Aren’t these bands supposed to take more chances than their breadwinners?

The two big faces here are Brutal Truth singer Kevin Sharp and Mastodon guitarist Bill Kelliher, who are joined by members of The Despised, Otophobia, and more. Naturally, Sharp leaves a lasting impression with his gargled and crazed vocals, while you wouldn’t even know Kelliher was on this thing since there’s nary a trace of his Southern-fried progressive riff-action. Then again, it was more than likely intended that way. And Sharp certainly has his moments, just check out “Drinking and Driving” and the excellent “Get the Fuck Off My Lawn,” two songs that elicit visions of the cowboy hat-adorned frontman swinging from the rafters and hitting himself with the mic ala BT in the early 90’s.

Clocking in under 30 minutes with 10 songs, there’s little fussing around during the straight-ahead d-beat plunder of the title track and “Silence of Violence.”Draw Back A Stump simply isn’t a head-turner, that’s all. We can see where Sharp and Kelliher were going with this though – they spend too much time in their main bands over-thinking things in an effort to remain atop their respective sub-genres (which they are, mind you), so every once and a while, it’s nice not to have to do any thinking.