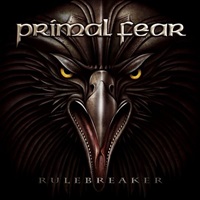 Hard to believe that Primal Fear is now onto their eleventh (!) studio album since 1998. There’s something to be said about getting your nose to the grindstone and putting in the blood, sweat, and effort it takes to stick to schedules in the creative, recording, and touring departments for a heavy metal band. Especially one at this level – headlining small theaters in most parts of the globe, but not quite the arena level where you can solely make ends meet without supplementary endeavors. Digression over: it’s time to bask in Teutonic metal glory with 11 more songs of prime time rhythms, steady grooves, and soaring plus edgy melodies.

Expanding to a triple-threat axe lineup (Magnus Karlsson currently relegated to studio/songwriting duties as family comes first) allows Primal Fear more opportunity for layering twin harmonies over an equally potent rhythm riff – as “Bullets & Tears” can bring about a lot of Judas Priest meets Thin Lizzy nuances, kudos to Alex Beyrodt/Tom Naumann and MK for keeping the proceedings lean and mean without shred overload. Reaching back into the band’s early self-titled discography for that mid-tempo straight forward hook on the title track follow up, bassist Mat Sinner’s background vocal importance along with his steady low end makes the chorus pop out as one that stays with earthdogs and rivetheads for months.

Continuing to be one of the upper tier singers and screamers in the business, Ralf Scheepers pushes himself to the limit a la Painkiller for mandatory ‘championing the genre’ “In Metal We Trust”, the guitar lines encouraging unison audience participation in all the key moments. Primal Fear over the past decade have added the epic element to their songwriting on occasion, this time taking on a 11-minute plus arrangement for “We Walk Without Fear” that features a brooding, almost time clock keyboard intro with symphonic keyboards, a dramatic, equally intoxicating instrumental middle section beyond the occasional bombastic transitions- outstanding all around.

In the end, Primal Fear stick to their tried and true convictions, and much like the previous Delivering the Black, as long as the sextet keep pumping out Accept/Judas Priest-like efforts such as “Constant Heart” and “Angels of Mercy”, the hordes will continue buying their tickets, wearing the eagle adorned merchandise, and keep an integral part of the genre alive.