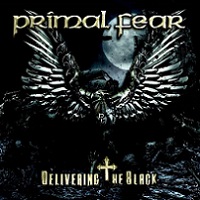 Seems like only yesterday that I remember ex-Gamma Ray vocalist Ralf Scheepers and Sinner bassist Mat Sinner got together to form a new traditional/power metal group with Primal Fear and release a debut self-titled album in 1998, back when Nuclear Blast expanded its roster in metal styles. Now to begin 2014 we have their tenth full length studio album Delivering the Black – and at this point in the game, you aren’t really expecting these musicians to lob djent riffs or earth shattering blast beats, are you?

This is standard German fare with a lot of Judas Priest/Accept-style rhythms and Ralf’s powerful lower to scream rage range that PF fans have come to love and treasure. You’ll get a couple of longer songs that showcase emotional depth like “When Death Comes Knocking” and the 9-minute-plus “One Night in December.” Conversely, the band know when to slow things down for a power ballad such as “Born with a Broken Heart” (featuring background vocals from Leaves Eyes’ Liv Kristine) and also go for the throat with the speed demon number “Rebel Fraction.”

Guitarists Alex Beyrodt and Magnus Karlsson (the latter also pulling keyboard duty) make for a dynamically explosive tandem, their seasoned skills and adaptations fit well with the Primal Fear sound. With veteran metal producer Jacob Hansen responsible for the album’s mix and the trademark eagle making its way through the skull cover art masses, I’m sure most who have been into the band will find little to quibble or complain about.

With another late spring North American headlining tour on the horizon to support Delivering the Black, one wonders if Primal Fear will ever grab more of that 18-25 demographic to move up the ranks here – or are they content to ‘deliver’ to the tried and true 30+ die-hards? For myself, the pinnacle of the band’s long career came in 2001 with their third album Nuclear Fire – and ever since then they’ve been solid, dependable power metal that lands firm with street credibility.